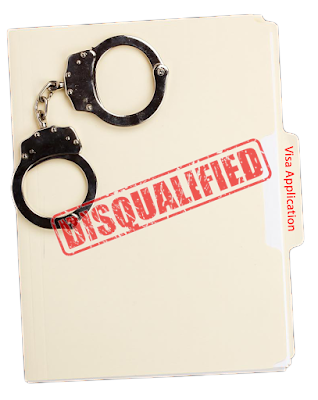 Conviction of a Crime of Moral Turpitude: A Bar to a US Visa

Last January, Robin Padilla shared a video of Mariel Rodriguez and their baby daughter in the United States. He was unable to join them because, despite being granted executive clemency last November, he still does not have a U.S. visa. Considering the recent conviction of businessman Cedric Lee for the kidnapping of his daughter with actress-singer Vina Morales, one has to wonder, does the conviction of a crime automatically disqualify a person from receiving a visa to the United States?

The short answer is it depends on the crime. If the crime involves moral turpitude, then a person convicted becomes ineligible to receive visa to the United States and to be admitted therein. This provision is not just limited to a conviction. Section 212(a)(2)(A)(i)(I) of the Immigration and Nationality Act (INA) also expands the ineligibility to include persons who admits to having committed, or who admits committing acts which constitute the essential elements of a crime involving moral turpitude (other than a purely political offense) or an attempt or conspiracy to commit such a crime.

Under Section 22.21(a) of the Code of Federal Regulations, the Consular Officer must determine whether the crime involves a moral turpitude against the moral standards generally prevailing in the United States.

In the Matter of Cristoval Silva-Trevino (26 I&N Dec. 826 (BIA 2016), the Board of Immigration Appeals held that the term "moral turpitude" generally refers to conduct that is "inherently base, vile, or depraved, and contrary to the accepted rules of morality and the duties owed between persons or to society in general." It requires two essential elements: reprehensible conduct and a culpable mental state.

If person who is ineligible under Section 212(a)(2)(A)(i)(I) is the spouse, parent, son, or daughter of a citizen of the United States or an alien lawfully admitted for permanent residence, then the person must establish to the satisfaction of the Attorney General that the alien's denial or admission would result in extreme hardship to the United States citizen or lawfully resident spouse, parent, son, or daughter of the ineligible person.

A person who is ineligible may also qualify for a waiver if they are a Violence Against Women's Act self-petitioner.

If you or anyone you know have any questions relating to ineligibility in receiving a visa to the at the U.S. Embassy in Manila, please contact a U.S. immigration attorney for more information.