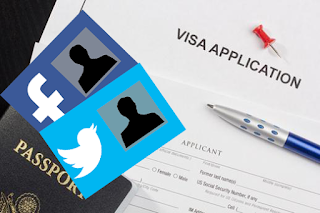 In a notice posted on March 30, 2018, the State Department is proposing to revise the collection of biographical information from nearly all visa applicants by requiring them to provide their social media identities on certain social media platforms during the five years preceding the date of application – with an option to list handles not explicitly required.

The proposal follows the Trump administration's promise of "extreme vetting" of foreigners entering the U.S. to prevent terrorism.

It is also an extension of the previous administration's instructions to collect social media identifiers when the State Department determines "that such information is required to confirm identity or conduct more rigorous national security vetting."

Greater attention was placed on immigrants' social media use after it was revealed that one of the attackers of the 2015 San Bernardino terrorist attack had, under a pseudonym, advocated jihad in posts on a private social media account. Authorities did not find the account until after she was allowed entry into the U.S.

If approved, approximately 15 million people will be affected annually, including applicants for permanent residency.

Some expressed their concerns on the proposal's effects on freedom of speech and association and on privacy.

In addition, the State Department also proposes to require information on five years of previously used telephone numbers, email addresses, and international travel, and whether specified family members have been involved in terrorist activities, regardless of visa application. For applicants for Immigration Visa and Alien Registration, applicants will be required to disclose all prior immigration violations while applicants for Nonimmigrant visa will be asked whether they have been deported or removed from any country.

The State Department intends not to routinely ask the question of applicants for most diplomatic and official visa applicants.