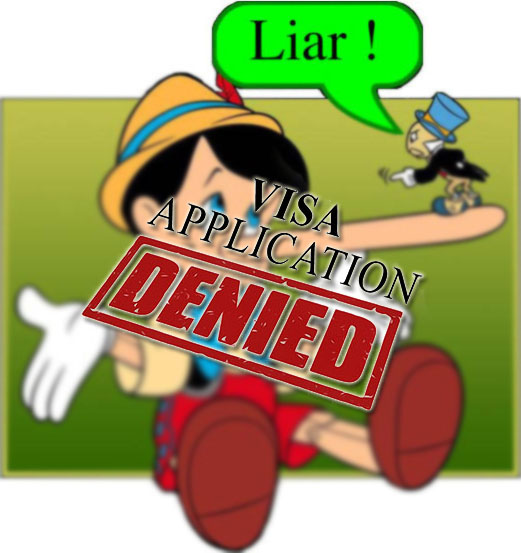 If Pinocchio, the famous fictional character whose nose lengthens every time he lies were the poster child for Filipinos lying on their US visa applications, the outcome of his lies would have been totally different. Pinocchio's legendary nose, if he were to represent a lying Filipino applicant trying to obtain a US visa, would not have lengthened every time he lied, it would have been deliberately cut off.

What happens to applicants who lie?

If an applicant lies to the US embassy during any part of the US visa application, he or she commits a major offense and such an act can be the fastest route to a US visa denial, or worse, potential inadmissibility to the United States.

The United States government considers lying on a visa application as potential fraud. According to them, fraud is committed if an applicant "lied, omitted relevant information on their application, or committed any fraud to get" an approval.

First time US visa applicants from the Philippines are subject to such a regulation. It also applies to Filipinos who are green card holders. They too can have their permanent status revoked if they are found to have lied during the application process prior to obtaining their green cards.

How is fraud by lying on a US visa application determined?

Lying on a US visa application can be determined in different ways whether the lie was not intentional or done on purpose. The US Government thoroughly investigates the information entered in US visa applications or disclosed during interviews.

Some Filipinos, in hopes of obtaining their US visas faster, tend to either forget their past information or deliberately cover up past circumstances they deem harmful to their application.

Here's just one of many examples.

A middle aged married couple who wanted to attend their relatives' wedding ceremony in the United States applied for a US visa months before the event. They had secured a wedding invitation from their relatives in the States bearing their names as part of the wedding entourage which took care of their purpose on why they needed to obtain a US visa. However, during the application process, they were asked if they had been married in the past. The wife answered NO. She was only married once to her husband currently seeking the same US visa with her. The husband did the same. He answered NO. The consul did a thorough investigation of the couple's records and discovered that the husband had a prior marriage decades ago which he failed to disclose.

The US Visas were denied for both husband and wife and they were barred from entering the United States for life.

Is there a way to appeal a denial?

There are numerous cases of fraud out there committed by lying on a US Visa application and Filipinos must be extra careful not to put themselves in such a situation where in some unfortunate instances, a compromise is impossible.

Fortunately, the USCIS offers waivers for those who had been charged of fraud but wanted to appeal their denial. However, not all appeals can reverse an application status. In some instances, the charged applicant may still not get approved entry to the United States.

Where can I get help from?

If you are one of the many Filipinos who had been denied a US visa because you were charged with lying during your application and would like to appeal, the best thing to do is to consult a licensed US immigration lawyer in the Philippines who can guide and help you with your situation. If you are just starting a US visa application and are not certain on how to go about the application without being charged of fraud along the way, seeking legal help may also be the best route to a smoother journey towards gaining entry to the United States.